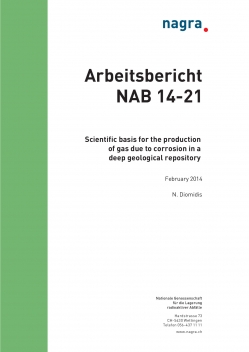 The Swiss national program for the disposal of radioactive waste involves emplacement of spent fuel (SF), vitrified high level waste (HLW) and long-lived intermediate level waste (ILW) in a deep geological repository constructed in Opalinus Clay. On the other hand, low and intermediate level radioactive waste (L/ILW) will be disposed either in a combined repository in Opalinus Clay, or in a separate repository constructed in Opalinus Clay, 'Brown Dogger', Effingen Member or Helvetic Marls host rocks. Under disposal conditions, processes which can lead to the generation of gases may occur. One such process is the anaerobic corrosion of metals which exist in the wastes themselves or are used for the disposal containers or in the construction of the repository. Such gases play an important role in safety assessment since they can lead to increased pressures in the repository making the characterization of their nature and production rate necessary. Consequently, the aim of this report is to critically review the available literature and identify the relevant mechanisms and representative corrosion and gas generation rates.

Corrosion is an irreversible interfacial reaction of a material with its environment, resulting in the loss of material or in the dissolution of one of the constituents of the environment into the material (Landolt 2007). Corrosion is a system property and thus the corrosion behavior of a material depends on its chemical/physical/mechanical properties as well as the chemical / physical / mechanical conditions of the environment. As a result, the mechanism and rate of corrosion of a metallic material will evolve with the conditions prevailing in the near field of a deep geological repository.

Due to the differences between the respective near field environments in the current Nagra reference repository concepts, spent fuel and vitrified high-level waste are considered separately from the long-lived intermediate-, and the low- and intermediate-level waste. In a first approach, the disposal concepts and the expected evolution of the conditions in the near field of each of the two above mentioned cases are presented in Chapter 2. Specific details with regards to corrosion-relevant materials properties and the criteria for selecting representative corrosion studies from literature are discussed. Carbon steel is the current reference material for a SF/HLW disposal canister as well as the most abundant metal in the L/ILW inventory. Its corrosion mechanisms and rates are discussed in Chapter 3 separately for each repository. Other metals such as aluminium, lead, copper, zinc and magnesium and alloys such as stainless steel and Zircaloy exist in the L/ILW inventory and their corrosion mechanisms and rates are discussed in Chapter 4. In each of those chapters the representative corrosion rates are compared in order to identify critical parameters which lead to the selection of a reference corrosion rate for each metal and repository concept case.